The next few chapters contain some pretty tactical talk, so to give you the best preparation possible, we yet again post the picture of the ship. We hope this will help you to get a better understanding of the next scenes. 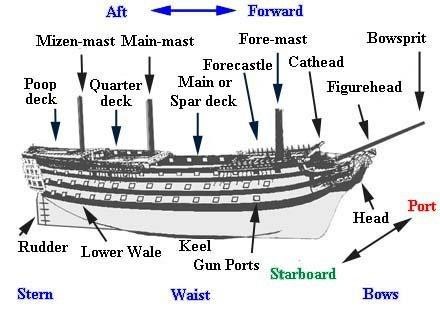 However, the music flowed into the chorus of the first verse, and the deck was entirely consumed by it. Only a few individuals in Lil’s immediate vicinity heard her words, but the crew in the centre of the deck was all dancing and packed together.

In a single breath, Lil ran across the deck between them to find the man with the stylish hat who was playing a guitar-like musical instrument in the centre of the crowd. Lil pushed the front of her shoe into the back of Ed’s knee…

Ed bent his knees and shook his legs, but managed to get back on his feet without fully kneeling down. Lil raised her eyebrows. When Ed’s performance abruptly ended, the choir also squeaked and Lil took advantage of that quiet moment.

“You guys must be the most easy-going people in the world! There’s a ship in the northwest!”

The mob, which had been joined as a mass, all turned their heads to the northwest at the same time. Only the upper section of the main mast was visible from the opposing ship, so the flag carrying the ship’s identity is yet to be seen.

“Where are the watchmen and Alain? Bring that old man here and tell the others to obtain their battle positions!”

Lil pushed through a few people who were moving frantically and snatched the trumpeter’s back.

“Blow the trumpet to wake the others off shift.”

The signal of the start of battle vibrated through the Bell Rock. Cesar, who was in a cabin, came out and caught up with her in an instant.

Cesar walked up to the stern with Lil and agonised for a bit.

‘I can’t tell Liloa, but that ship can be one of the battleships that departed from Marchand to rescue the Admiral. In this short amount of time, the carrier pigeon can’t have reached the fleet yet.’

Cesar chose his words carefully and decided to wrap his warning in a reasonable conclusion.

“It could be the Southern Navy or even a ship from the Mondovi fleet.”

Lil answered, looking at the sea.

“I know. In both cases, we need to be prepared.”

Immediately after, someone from the watchtower shouted.

Lil ran up the steps of the stern and rechecked the ship full of sails without any flags.

‘Navy ships normally have a large mark in the middle of their sails.’

Lil tilted her head in confusion.

“It’s rare and also pretty suspicious, but what if it’s indeed a merchant ship?”

“Hmm… A merchant ship… But why is a merchant ship sailing all the way to the quiet east? It’s more likely to be a ship belonging to the League.”

“Nothing can be ruled out.”

“No, as far as I remember there haven’t been any ships going back and forth this way for a long time, and in this desolate area…”

‘If it’s indeed a merchant ship, it might be carrying slaves… No, the Garni association doesn’t have control of the East yet, so it might be searching for an island or sea to find new business. Then shouldn’t we check?’

Lil wanted to block any new business in advance.

‘But will that work? This time, we have a lot of sailors belonging to other captains, so if we fight recklessly, it will cause a headache later on. Also, Cesar will disagree with any future battles…’

Lil took a sharp look at the ship that was beginning to emerge.

“In addition… is there a ship like that in the League? I don’t remember… look, Cesar… I’ve never seen      such a figurehead before. A mermaid with a sword? Isn’t that similar to Garni’s taste?”

After removing the lens from her eye, Lil handed the telescope to Cesar. She fixed her gaze on the unidentified sailing ship and continued.

“Since there is no information, let’s move as safely as we can. Shall we stay out of range for now?”

“If we try to outrun it, we would only look more suspicious. And if that’s a ship from Mondovi, you’re saying it has overtaken us right? That can only mean it’s exceptionally fast*. So, we can’t get away without being caught?”

“If we turn properly…”

“But it doesn’t appear like a ship with such speed. This one looks really pudgy. I don’t think it’s a Mondovi ship. Legardon doesn’t do strange things to conceal itself offshore either. I mean, what ship does that? Why?”

‘If the Navy indeed departed Marchand, they can very well know what the Bell Rock looks like. It’s truly a shame that the message containing the statement that the Admiral is safe hasn’t reached the fleet yet.’

Cesar couldn’t help but glance at Ed. He was standing on the forecastle, with his back towards them, also checking the opponent’s boat.

‘If Edgar can send and receive hand signals with the Navy, he can give some instructions to ignore our ship. If so, he should help. I don’t like it though.’

‘If she can see him move his hand, I will raise her suspicion in an instant.’

“I don’t think we can avoid it. Should we go first?”

Lil looked up at Cesar to ask for support.

‘No matter how bad the situation is, avoiding it isn’t always the answer. On every voyage, saving supplies is the basic rule. Who knows how many days we will waste if we don’t pass the strait on a windy day like this. In addition, we loaded just enough supplies to last this voyage to avoid any speculation from the League…. No, I can’t blindly count on safety, just because I’m frightened by some slim odds… Also, running away does not guarantee complete safety either.’

With anguish tickling her forehead, Lil rubbed her brows out of frustration.

‘Normally, I could charge ahead easily, but I can’t do that now, there are a lot of adverse possibilities. At a time like this, a ship without a flag… On the other hand, since we have disguised ourselves the moment we set sail to Marchand, we can easily be mistaken for a merchant ship…’

The worrying Lil approached Alain, who was attached to the railing a little further away.

“Double-check the Bell Rock’s disguise with the other crew members, and call Ed over there.”

“It doesn’t look like a Navy ship just by looking at it, have you ever seen a Navy without a flag? Those are the ones who have nothing to fear or to be afraid of under the sky. Why would they let go of their high-spirited pride?”

Lil just stood there staring at Alain as he brushed his front teeth with his finger. Alain clenched his nails and twisted his lips to get food bits out of his teeth. But in the end, he couldn’t evade Lil’s stare and walked down the stairs.

“Anyway, just be careful with everything. Hey, Jericho! Come here! And Courant! Bring the doctor to the Captain!”

When Alain’s bald head moved away, Lil looked back at Cesar. He had a much gentler expression than before. Making her wonder.

“Looking more closely, it doesn’t look like Mondovi either.”

“How can you be so sure all of a sudden?”

“There are no traces of axes hitting the railings, no ropes tied to the rigging, no signs of remodelling the gun gates.”

“You mean a ship with no signs of battle?”

“Still, it could be a scout ship sailing for the first time… Well, it looks too slow to be a scout ship. Besides, why would the Legardon fleet scout this place? The same goes for Mondovi. And weren’t they aiming for Amiaeng?”

A voice cut through the serious atmosphere.

“Captain! You called for me?!”

Ed’s voice was undoubtedly cheerful. He was always frivolous whenever she called for him, but Lil simply ignored him and pointed to the distant sea.

“Is that ship familiar to you?”

“No. It’s not a battleship just by looking at it, so what are you so scared of?”

“Do you want to be hanged by your neck?”

Of course, Ed knew it wouldn’t happen, but he stroked his Adam’s apple anyway. He replied shakily, teasing the savage Lil who didn’t return a single glance.

Lil crossed her arms and pondered.

‘There’s no way he’s lying unless he wants to kill himself, he’s also standing on the Bell Rock after all. The blind spots we have now are his limited memory and lack of up-to-date information.’

“But there must be some sort of intention for that ship to hide its identity. Hmm, that’s interesting. It wouldn’t be a bad idea to assume battle.”

“The most advantageous thing for us to do is to maintain this speed and course1. It would also be appropriate to engage and overtake the opponent.”

“Yeah, turn to starboard immediately after engaging and utilise the right canon. However, if our deck crew isn’t quick enough, the stern will be hit even before we get to do the second shelling, but I don’t think that unfortunate possibility will happen because the wind direction is in our favour when turning.”

“But there is a problem with our supplies, and half of the crew are borrowed, so we can’t make a preemptive attack. Besides, our opponent’s nationality and affiliation are unknown. A preemptive attack is not allowed.”

“The fact they lowered their flag could be for a different reason, completely unrelated. It’s a strange case, but it must be taken into account. The ship could surrender too, however that’s a hasty conclusion…”

After talking zealously, Lil suddenly shut her mouth and stared at Ed strangely.

“Why am I talking about this with you? And why haven’t you left yet? Are you offering me your neck?”

1Course: The direction the ship will go.

* “And if that’s a ship from Mondovi, you’re saying it has overtaken us right? That can only mean it’s exceptionally fast.” : The Mondavi fleet is said to be staying at Marchand, which is much further south then where they are now. For a ship from the Mondovi fleet to be sailing towards them from the Northwest, means they had to go from the south all the way up Northwest, make a 180 degree turn and sail to the southeast. Meaning they somewhere had to overtake the Bell Rock and that they have to be a lot faster than them.

Story of a Big Player from Gangnam