Lil looked back at Cesar.

“Why are you keeping quiet?”

She was sceptical of Cesar’s silence because he was normally condescending towards Ed’s extravagant act. She doesn’t realise that he’s mute for a reason. He was eager to hear it straight from the Admiral.

“You kept changing your mind… Aren’t you hoping to hear a different opinion?”

Scratching her chin, Lil roughly agreed with Cesar. She felt kinda embarrassed to also see it that way. As a result, she diverted her attention by giving Ed a beating.

“Ed. Hurry up and set up the infirmary.”

“You’re not going to tell me what to do if I’m attacked?”

When Lil narrowed her eyes, Ed tightened his calf and readied himself to get hit by a kick. So, when Lil threw her words instead of her fists, Ed almost stumbled.

“Ed. Are you distrusting my command right now? With this resistance of yours, it seems to me that you need to know all my tactics for you to feel safe.”

“It’s not like that, Captain. I can actually help…”

Surprised by her changed tone, Ed responded by shaking his head.

“I remember all the information you leaked. If you have anything else to say, tell me right now. I won’t ask you why you omitted it at first.”

“Then go down and get your equipment ready.”

Lil was adamant. It left him speechless, not knowing how to refine his worries.

‘I’m not questioning Liloa’s leadership, I’m doing this because I want to be by her side in case a battle occurs. Will there be a time when Liloa allows those irresponsible and clumsy feelings?’

At last, Ed gave up and shouted.

“Do a sloppy job and I’ll kick you directly from the railing, be aware of that.”

As a means of demonstration, Lil lifted her foot and kicked the air. After staring at it blankly, Ed hurriedly turned his shoulders and walked down the stairs. Muttering about how he would like to slap Commodore Sagastar on the cheek right now. But Lil didn’t hear it since she was too concentrated on the sail of the back mast. With one hand pushing her hat down, she gazed at the taut sail. The sail that receives the wind at 70 degrees inflated to starboard. Lil paused and felt the wind hitting her cheeks, nose, and hair. She glanced around and saw the occasional white waves. The unknown ship had the strongest thrust, between 135 degrees with a tailwind. It was coming from the northwest while the Bell Rock was heading northeast.

“Cesar. If the Bell Rock crosses their bow first, our stern will be exposed, right?*”

“Yes. Keeping this speed exposes our stern at close range.”

“Isn’t it better to sacrifice our bow at 80 morts than to sacrifice the stern at close range? The opponent may engage, but it’s better than being hit at the stern side.”

“Yes, I thought of the same thing.”

Carrying the exception of battleships, there were very few ships with cannons on the bow or stern, rendering most commercial ships defenceless in battle. However, while any ship would be diligent in preoccupying the safest position before shelling began, Cesar was an excellent navigator who could establish a favourable position for engagement faster than the enemy ships.

However, at its current pace, the Bell Rock would be in a position to receive an oblique engagement from the enemy. On the other hand, the range of their opponent was limited and its position may act as a shield. In the case of the Bell Rock’s stern, there was a chance that the ship’s cabins, including the captain’s chamber, may be directly hit by shells or worse if the rudder below breaks, it will be difficult to escape.

“If we fire first, we will turn left and aim for their stern. No wait… Can we even do that?*”

“We’re totally in the wind. I think it’s dangerous.”

“Then we’ll turn to starboard and maintain it on our left.”

The nodding Lil shoved Cesar’s shoulder toward the wheel.

“All right then. Slow down and turn to starboard after 80 Mort.”

“Marenzio needs to be instructed. I’ll go there myself since the artillery deck will be a mess.”

Lil shouted as she ran down the stairs of the stern.

Unable to understand her shout, Alain raised his head towards the rear sail while commanding the sailors with both arms. Lil jumped the last three or four steps at once and approached Alain.

“Grandpa! Slow down! Turn the sail to port!”

Alain yelled and met her gaze. Lil was extremely nervous as the majority of the crew was new on the ship. They had to go and maintain their position, prepare their areas for battle, and go through the strain and weariness of being armed excessively. Even so, there was a reason why Alain only acted a bit sullen but didn’t dare to complain any further. It was because this particular personality of his captain already saved his life once or twice. However, sailors like Alain and Marenzio, who had a wealth of experience, have every right to use a thick swear word here and there.

Lil chinned towards the approaching ship, which still hadn’t raised a flag yet.

Alain nodded and began to command the deckmen again. As his command fell, Jericho repeated it. The deck became noisy once more at the changed order.

Lil passed through the upper deck and went down to the artillery deck. Marenzio’s hoarse voice was heard from the stairs. Lil bowed her torso in the middle of the stairs and looked around. The deck with closed gun gates was not very bright. Sailors who were dragged out of bed were standing next to the cannons, yawning. The atmosphere was generally chaotic because an outside crew was involved.

She spotted Marenzio having a joke with a nearby sailor.

When Lil nudged her head to the stairs, Marenzio followed her up to the upper deck. Lil handed him her telescope.

“After I say fire, we’ll turn to starboard, so you have to open the gun gates and fire right away. But don’t take it out in advance without my order.”

Marenzio, who had his neck extended forward, raised the telescope and shouted.

“Captain! What are you talking about, this ship looks so slow and blunt in the rear and front.”

“Even if it doesn’t look like a battleship, we have to be careful as long as it has guns.”

“You’re doing this again, huh? You’re the biggest perfectionist of all the perfectionists. The Captain must be the most worn-out person in the world.”

“Shut up. Get down before I break your other arm.”

Marenzio shrugged as if he was fed up and went back down the stairs.

Lil got up to the poop deck to observe the deck of the opposing ship.

‘It doesn’t look like it’s preparing for battle, but from here I still can’t see their artillery deck, so I can’t be sure yet.’

She then saw a man on the poop deck holding a telescope, waving his hand generously. Similarly, Lil also waved her hand above her shoulder with a bright smile, although unseeable from that distance. The ship sailing along their course began to enter the range of Bell Rock’s bow. In terms of hunting, the mouth of a beast, which was as wide as possible, was getting closer.

‘If it’s a merchant ship, we will pass with confidence, and if it’s the Navy, we without a doubt won’t touch them. I’m not going to blow the cover of my innocent-looking Bell Rock by bombing it…

That ship still hasn’t raised its flag. There must be a reason for their suspicious behaviour. It’s exhausting to consider even the absurd probabilities, but two hundred lives are on my shoulders now.’

Lil chewed her lips like crazy and clenched her telescope one last time before observing the ship from bow to stern again. She examined everything from foreign objects to junk. If her tenacity could pierce anything, the eyepiece would have been shattered by now.

There was nothing though. The moment she put down the telescope, disappointed by the opposing ship’s hull that didn’t give off any clues, a couple of lights appeared in front of her like afterimages.

For a moment, she felt a chill in her heart. Like it was being squeezed. Lil quickly put her telescope into her eye. A beam of light, like reflected light, was dizzyingly passing across the deck.

‘There’s no way they would leave material on deck that can reflect sunlight like this, especially during this time of day… It can cause a fire if it goes on like that. What the hell is the Captain doing to be so insensitive to fire…Shit…’

A distant memory pulled her by the collar and Lil was sucked into the abyss of her swirling past. In her search for answers, she recalled a merchant ship belonging to the Garni association they had robbed around a month ago.

‘…Sailors who were strangely indifferent about a possible fire…’

Lil took a breath and opened her eyes wide. The light stream went down and disappeared exactly to the entrance to the artillery deck. One, two, three…

Her instinct flashed across her head like lightning. Lil, who threw the telescope away, shouted like a madman.

This chapter contained some tactical talk about the right strategy for engaging in battle. To clear the scene’s up for ourselves we drew the possibilities and eventually thought that as we already made those, why not share them with you! We hope that with the following pictures, the different strategies will become a bit more clear! Let us know if they’re helpful or annoying (as in disturbing your reading flow), so we can decide to make them for future or past chapters! 🙂

Lil: “Cesar. If the Bell Rock crosses their bow first, our stern will be exposed, right?” 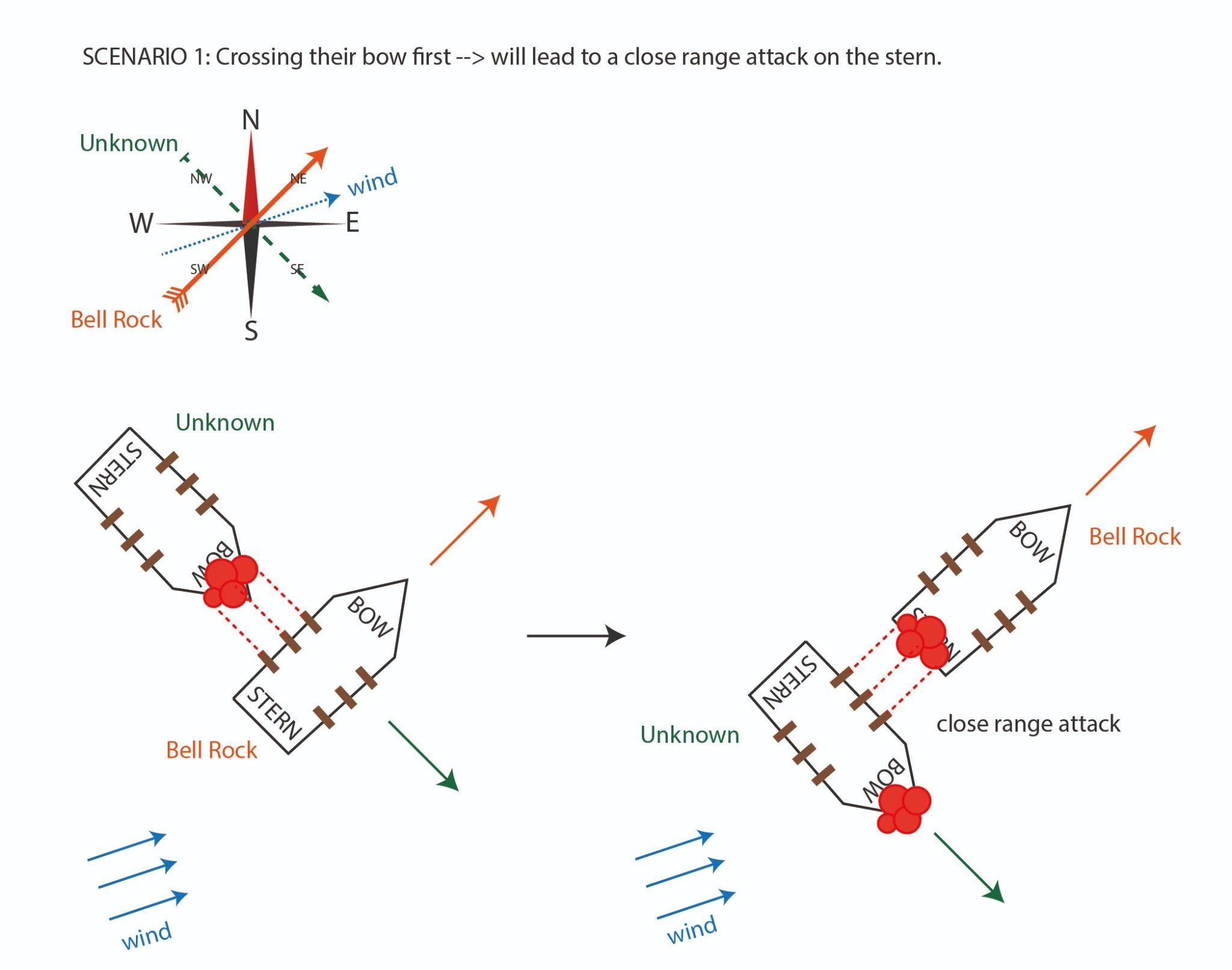 Lil: “Isn’t it better to sacrifice our bow at 80 morts than to sacrifice the stern at close range? The opponent may engage, but it’s better than being hit at the stern side.”

Cesar: “Yes, I thought of the same thing.” 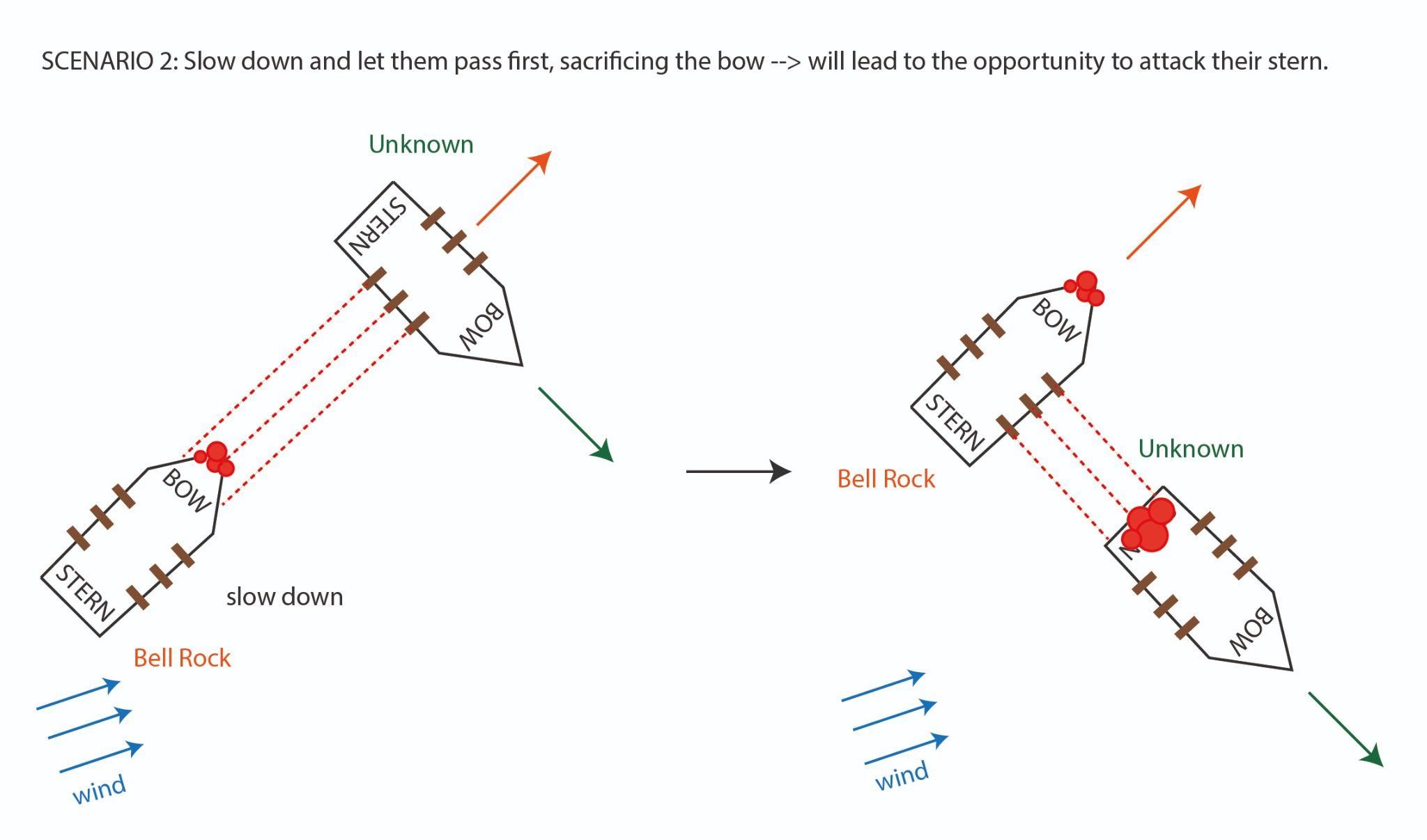 Lil: “If we fire first, we will turn left and aim for their stern. No wait… Can we even do that?”

Cesar: “We’re totally in the wind. I think it’s dangerous.” 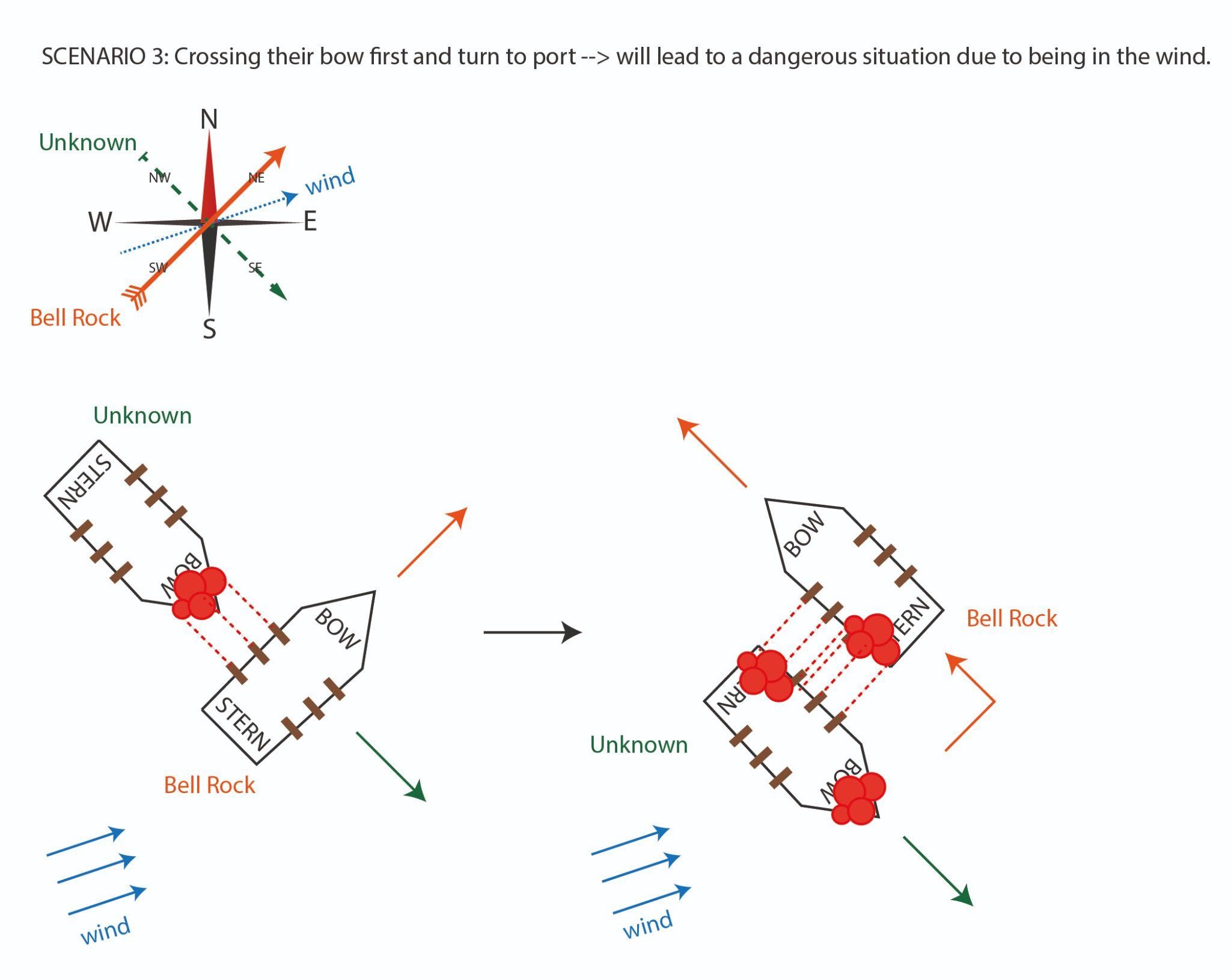 Lil: “Then we’ll turn to starboard and maintain it on our left.” 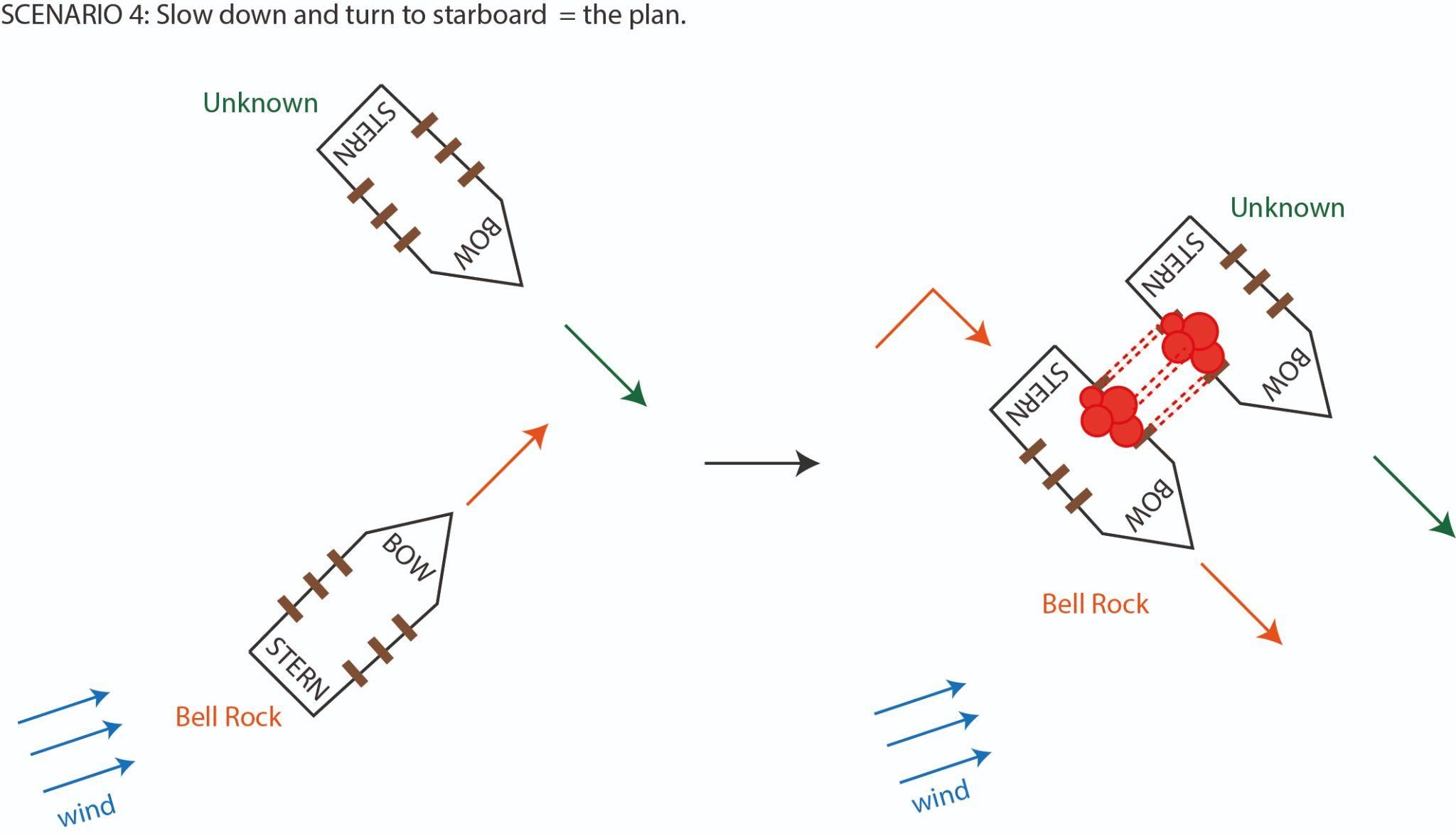 Crossing the Crowd to Chase Love