3 hours before it happened.

Aria was lost in thought as the maids, who had come with Marronnier, put on the dress.

How can she find out the noble who had come into contact with the gutter rat?

However, it was concluded that the person was not the Emperor’s Knight. A noble enough to attend the founding ceremony in person would serve the Emperor or the Grand duke, but if not both…….

Then she just had to find an ordinary noble with a body trained like a knight. Then, she can first look up the list of people attending the founding ceremony.

Aria was working out her plan in her own way.

“You got cream on your lips!”

Aria came to her senses and looked down at the plate in her hand.

It was the remains of her eating the shortcake. It seems that she unconsciously picked up the dessert next to her and ate it.

‘If I eat sweet things, my head will work well.’

In fact, Aria herself didn’t know that she would eat desserts from the Imperial Palace so well. Because she only remembered that she vomited everything she ate at the imperial palace.

‘That means that the memories of the past have no longer had any effect on me.’

Of course, the cooking skills were far inferior to Baker’s.

Aria licked her lips roughly, and then she casually picked up the macarons from the dessert tray.

At that moment, Marronnier begged her earnestly, so Aria had no choice but to put it back down.

– Then why did you bring the dessert tray?

– Want me to get scolded?

Marronnier used a strange expression in her playful remarks.

Does that mean she wants to be scolded?

Of course, she didn’t mean for Marronnier to be afraid of her.

Aria felt a strange feeling and picked up the strawberry cream cheesecake. With this, the crumbs will not fall.

“Oh my, there’s no spring flower fairy who had cream on her lips.”

– There’s no such thing as a fairy.

But when she heard the truth that there are no fairies in the world, Marronnier pointed to the mirror.

“But Young Madam, mirrors don’t lie! Over there, there’s a fairy…”

“Oh no, fairy. If you came here to collect honey, you came to the wrong place. Flowers are in the garden.”

Aria stared at Marronnier, who was making a fuss, for a moment with a puzzled look.

‘How do you come up with such an innovative expression every time you dress me?’

Aria left the dressing room, shaking her head. She didn’t even look in the mirror because she knew Marronnier would have made her pretty enough.

“Ah, wait a minute. Young Madam! You still have cream on your lips…!”

It was when she paused for a moment at the sound of Marronnier rushing from behind her.

Aria found Lloyd waiting for her outside the dressing room. He was wearing a black robe that was different from the last banquet.

‘A dress similar to that for a wedding.’

He usually only wears clothes with minimal decoration, so wearing a colorful robe gave him a distinctly different feeling.

‘But definitely, he’s grown a lot.’

The robes may be similar, but the feeling is completely different. She only thought that the boy at that time was as pretty as a neat orchid.

He came in wearing a robe with a design similar to the one he wore to the wedding, so she felt shaky. The boy’s growth, which she had forgotten for a while, approached clearly as if she could grasp it.

‘I just wanted myself to see this…… Hmm?’

‘What was I thinking?’

It was when she was puzzled by the question mark floating above her head.

After staring at her for a moment, Lloyd approached her and stretched out his hand. His thumb touched her lips.

Aria shuddered and shrugged, and then she belatedly opened her tightly closed eyes.

He must have cleaned it before. Aria rubbed her now empty lips with the back of her hand for nothing.

She could still feel the touch of his fingers on her lips.

She almost made a voice. Aria opened her mouth with rabbit-like round eyes.

Lloyd put his finger, stained in cream, to his lips. Lloyd, who frowned as she put the macaron in his mouth, muttered without changing his expression.

All sorts of words ran through her mind. But she didn’t say anything, and ran straight past Lloyd as if running away.

Her face was so hot that she was not confident with his escort.

A mysterious voice followed her.

But Aria didn’t stop, she only hastened her steps faster. Lloyd stared intently at Aria’s back.

A light fell over her head. The colorful lights engraved in a circular shape looked like an angel’s halo. Her soft pink hair was drooping and fluttering in the air. Intertwined with the dress with countless petals engraved on it, she was like flower petals that bloomed profusely and fell fleetingly.

Suddenly, Lloyd frowned and said. Without realizing it. As always, whenever he saw Aria, his eyes were somehow dazzled.

Lloyd stopped for a moment and followed Aria silently.

After her embarrassment had subsided to some extent, Aria entered the banquet hall with Lloyd.

However, as soon as the gatekeeper announced the appearance of the two, the eyes of the nobles were intensely drawn to them. So much that the back of her head hurts.

It was a little different from before. At the founding ceremony banquet, their gazes were so attached to the wall that it looked ridiculous.

Even now, they didn’t come to greet them warmly or say hello, but there was something different about the atmosphere. It was because the nobles stared at them as if they were observing them and did not avoid their eyes even though it met.

“Shall I pluck out all the eyes…”

What? After Lloyd’s small murmur, Aria looked up at him, widening her eyes. Then, Lloyd, who looked very uncomfortable, was struggling to swallow his murderous energy.

Although he didn’t seem to be able to swallow it very well.

“Everyone can’t take their eyes off you.”

Aria grumbled inside as she saw the many young ladies bewitched, fixing their gaze on Lloyd. She found it strange.

Weren’t these nobles terrified when Lloyd approached them and scattered all over the place? In the past and in this life.

‘And then I got caught in that part.’

No matter how good Aria looked on the outside, she was Valentine. The young ladies of prominent families who have a lot of say in the social world are betting on Valentine’s Grand Princess.

‘Even if it was meant to blame Lady Leshan, it was too risky.’

Had it flowed like her previous life, such a thing would never have happened.

While Aria was absorbed in her troubles, there was a soft waltz. Although the nobles looked openly curious, no one approached her, so the surroundings were quiet.

Lloyd held out his hand to her.

Aria, as she had practiced with him beforehand, laid her hands over his hands. It was a reflex action.

Then Lloyd, who also grabbed her opposite hand, placed his hand on Aria’s hand and added.

“Until the last song, of course.” 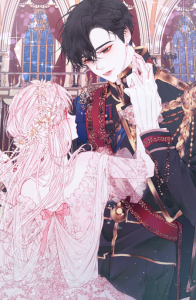 As soon as the first song was played, Aria, who was somehow nervous and had hardened her body, smiled a little.

– Aren’t you too greedy?

“Then, did you have plans to dance with other bast….people than me?”

Lloyd grabbed Aria’s hand. It wasn’t coercive, but it wasn’t a gentle touch either. He quickly grabbed her body, wrapped his arms around her waist, and led her into the center of the hall.

That was the moment.

Lloyd whispered into Aria’s ear. Her ears tickled and she was numb in his voice.

Aria got the feeling that Lloyd’s words didn’t seem like talking to her. It was like he was talking to someone over her shoulder.

‘Who is that person? Like you’re going to kill them…….’

Suddenly, she heard the sound of someone running behind her back, and Aria tried to turn her head. Then Lloyd grabbed her by the back of her head and pulled her into his arms.

Thanks to him, she couldn’t even move.

Don’t keep it in your eyes and don’t leave it in your memory. He murmured as if flowing to the sound of the music. The voice that seemed to be slightly mesmerized was as if he had said something he wasn’t even aware of.

Aria, who only blinked her eyes while being hugged by Lloyd, sent a message.

– Lloyd. I’m saying this because I don’t think you know, but we’re holding each other in the middle of the hall right now.

They were receiving the attention of many nobles.

He then released the strength in his hand that had pulled Aria.

Princess Is Glamorous In Modern Day

The Beautiful Wife of the Whirlwind Marriage